Stop stress from getting to you

Posted by johnlamb1 in Personal development on June 24, 2012

I was sitting at a traffic light yesterday, and noticed an elderly man in the car next to me, cussing up a storm. Apparently, the cars passing by prevented him from making a right turn, and he had something to say about each one.

While I found the incident entertaining — it seemed like a Monty Python scene — I did feel bad for the man, and wondered what made him react that way. Perhaps he’s dealing with a lot and it just got to him that day.

So how can you manage your stress, and avoid following our friend down this profanity-laden path?

Get moving
When I’m having a really bad day, I look forward to hitting the gym, pool, or going for a walk. Exercise is my top way to manage stress.

Phone a friend
Human interaction is a great stress buster. Connect with a friend and go for coffee, see a movie, or just sit and chat. The contact will do wonders for your psyche.

Meditate
I’ve never really tried meditation, but probably should. The touted benefits are impressive, and some of the best medical people are strong proponents.

Count your blessings
I read somewhere that people who are grateful tend to be happier. When you’re having a bad day, take a few minutes and think about the good things in your life —family, friends, good health, stable job, etc.

Tap your feet
Put on some music. Logic says play something soft and soothing, but I prefer loud and energizing.

Make plans
Have you always longed to see Paris? Start planning. Want a new job? Update your resume. People under stress too often fail to see possibilities. Your future is what you make it.

Break your routine
Work, home, sleep. Life can become boring. Don’t let it. Leave the television off and gather the family around the Monopoly board. Grab a pizza on the way home and take it to the beach or park. Rearrange the living room. Doing something out of the ordinary and you may find you forgot about your troubles…

Your turn…how do you manage stress?

Make your own luck

Posted by johnlamb1 in Business skills, Personal development on June 17, 2012

“I’m a great believer in luck, and I find the harder I work, the more I have of it.”
– Thomas Jefferson

These words, spoken by our third president, offer a good creed to live by. Regardless of whether you’re looking for a job or hoping to connect with a hot sales prospect, an opportunity will likely present itself. The key is being ready when it happens.

Many years ago, fresh out of graduate school, I was working a summer job at a nearby resort town, when the news anchor of our local CBS affiliate came into the business. She seemed very nice, so I asked her advice about breaking into television.  She’d probably been posed that question a million times, but graciously suggested college as a good starting point.

That was my opening.  I quickly told her I had just earned a Master’s degree in Broadcast Journalism from Emerson College — a school known for its outstanding communication program.

As fate would have it, there was an opening in the Sports Department, and she set up a meeting with the Sports Director — who also happened to be Emerson alum.

Chalk one up for Mr. Jefferson.

Oops …
During the hiring process, the News Director called. Both regular sportscasters were out and he asked if I would produce the sports segment for that evening’s news.  He made it very, very clear that I would not be going on the air.

Still, I was excited about the opportunity and hurried to the station, where I spent the afternoon editing video and writing sports scripts for the news anchors to read.

The News Director was apparently pleased with what he saw, because late in the day he asked if I had brought my jacket and tie.

I hadn’t. Opportunity had again presented itself, but this time I missed my chance, and the newscast went on without me in the Sports chair.

I did eventually land the sportscasting position, but I’ll never forget the lesson and the words of Thomas Jefferson.

We can all learn from Scooby Doo

A friend challenged me to write a blog about Scooby Doo. At first I laughed, but it was my favorite childhood cartoon, and this sounded like an interesting challenge, so here we go….

Things aren’t as bad as they seem
At the beginning of each episode, viewers were introduced to a spooky new villain, usually a ghost, ghoul, or monster. By the end of the episode Scooby and the gang had exposed their very-human adversary as the crooked neighbor or greedy nephew. In much the same way, we should remember that our initial impression of a situation is likely worse than reality.

Everyone brings something valuable
Scooby and the gang were as diverse a group as you’ll find. But each brought a strength that meshed with the others’: Velma was a walking encyclopedia, Shaggy could throw his voice, Fred was the leader and master planner, etc.  I’d rather have a team where everyone contributes than one that relies on a single, star performer. Additionally, a diverse team brings more potential approaches to solve a problem.

Nobody’s perfect
Shaggy struggled with simple math, Scooby would steal half of his master’s sandwich (he is a dog, after all), and “Dangerprone” Daphne often made a bad situation worse. Despite these flaws, the team stuck together and managed to solve the mystery. If you expect perfection, you’re guaranteed disappointment.

Reward people for their efforts
It was a common scenario: someone had to climb through the open, second story window and only Scooby would fit. But he was frightened and unwilling— until Velma or Daphne offered him Scooby Snacks. You might call this bribery, but I prefer to say that the treats were pre-paid compensation for taking on an extraordinarily challenging task. And kudos to Scooby for occasionally negotiating the number of treats when a situation was more dire than most.

Loyalty matters
This may be the most important lesson of all. Regardless of the situation, the gang stuck together, and no one was left out or left behind. The show helped us learn the meaning of loyalty and friendship.

Take Better Photos With These 7 Tips

Posted by johnlamb1 in Employee Communications, Photography on June 4, 2012

It’s graduation season, Father’s Day is around the corner, and the annual flurry of summer activities is fast approaching. Your camera is at the ready, but you want to take you photos to the next level.

Or perhaps your boss is asking for more and better photos for your newsletter or company Facebook page.

No sweat. Follow these 7 simple tips and you’ll see better photos the next time you say cheese. 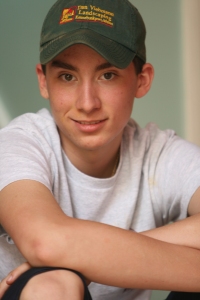 subject. In general, you don’t need to see your subjects’ feet. While there are exceptions, most times you’ll be fine with a waist-up shot. Think of trying to fill the frame with your subject. Additional benefit of moving closer: if you’re using a camera’s built-in flash, its most effective within 8-10 feet.

Take lots of photos
A professional photographer will take dozens of images to get one good shot. Yet, amateurs often shoot one or two images, and then move on. If you need an important photograph, don’t rely on a couple of images. Move around, try different settings or poses, changes lenses, shoot with and without flash — the more variations the better.

Use your flash — outside
When people face the sun, they squint, and when they turn away from the sun, you get shadows on their face. So, get the sun out of your subject’s face, and use your flash to knock out the shadows. 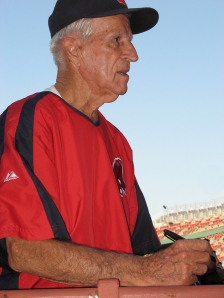 game, taking a breather during a time out, or celebrating after a victory. Yeah, you’re not getting the game action, but sometimes the best way to capture the thrill of victory or the agony of defeat is looking the other way. The photo of Red Sox Legend Johnny Pesky, left, was taken prior to a game.

Get a ‘safe shot’
This is a corollary to the previous tip. If you have a tough photo assignment, shoot something as a back-up, in case you can’t get the action shot. Years ago, I was hired to photograph a Boston Pops concert in Portland. There was one catch: I wouldn’t be allowed near the stage during the show. Fortunately, I had backstage access prior to the concert, and took a nice photo of my client with the conductor. Thanks to a good telephoto lens, I was also able to capture some good images of the show, but having the pre-concert photo took loads of pressure off.

Make your subject feel comfortable
While some people love being photographed, many shy away. When faced with a hesitant subject, spend a few minutes chatting to help them relax. Be confident in your ability to capture a flattering image. I tell people we’ll keep shooting until we get something they like.

Plan ahead
To paraphrase a popular real estate term, the key to successful photography is practice, practice, practice. My first paid sports photography assignment was a basketball game at a local college. A few days prior, I found another college game, and shot that as a test, trying different lenses, angles, etc. That day showed me what worked and what I needed to change.